Aaliyah Dana Haughton is an actress and a singer who signed to a recording contract at only 12 years old. She was a famous R&B singer who lost her life due to a plane crash on August 25, 2001. Aaliyah was born on January 16, 1979, in Brooklyn, New York and has sold a million copies of her debut album Age Ain’t Nothing But A Number. In 1996, she released her second album, One In A Million and lastly her third album, Aaliyah. She was a very successful singer who has inspired millions of people for many years.

MAC Cosmetics has decided to release a limited-edition Aaliyah Collection in 2018 to honor her death. MAC is a famous brand in the makeup industry, and it is known for having the best celebrity collaborations with Nicki Minaj, Ariana Grande, Lady Gaga and many more artists. August 24, 2018, is set to be the release date for this great collaboration. Aaliyah will always be an icon, and this is a great way for her fans to connect with her. It is amazing that MAC decided to give Aaliyah a collection and will be honoring a beautiful and talented artist.

In this collection, I am excited to see the many different lip colors that will be available. I am expecting to see more red, nude and purple lipsticks because Aaliyah has a more natural look and that is how she mostly wears her makeup. I am also a big fan of these shades because they have a warm undertone that compliments darker skin complexions. Aaliyah’s makeup look embraces her beauty even more, which is why I am a big fan of her looks. Her eyeshadow and lip colors bring out the features on her face, and she tends to have a more youthful appearance.

Aaliyah’s beauty has evolved throughout the years, and she started modern trends with her shoulder-length layered hair, minimal foundation and a natural eyeshadow completed with a bold lip color. During the release of her second album One In A Million, she began to wear long hair with her signature side bang, which was very popular in the 90’s. Her beauty was unique as she wore “sun kissed makeup looks” with a natural glow that is unforgettable. She began to wear a smokey eye with bouncy curls, which transitioned her entire look. Aaliyah was a singer who was able to pull off various of makeup looks and still appeared to be flawless because she knew how to own it.

Image Credit: Pinterest.com
Her fashion sense was very stylish as she wore baggy pants, overalls, crop tops, bandanas, and sunglasses. I love the way that she dressed because she was expressing herself as an artist.

This MAC collaboration will become a success because there are millions of Aaliyah fans all over the world. 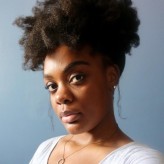 My name is Zayna and I am a professional writer.