Want to lose weight? Struggling to give up carbs? Are you feeling tired and overwhelmed? Or do you just want to try a new diet and gain a better lifestyle?

When trying to lose weight, it seems like the only option is to avoid carbs. Going on a low-carb or no-carb diet can cause energy crashes mid-day. Luckily, there is a new carb diet that can actually cause weight-loss. Carbs have a lot of fiber in them, which creates the feeling of hunger to diminish.

Some of the best unknown and underrated carbs for weight-loss are teff, amaranth, and triticale. Teff is an Ethiopian food that’s becoming the new quinoa as far as superfoods go. According to Huffington Post, health benefits include high protein, calcium, magnesium, phosphorus, iron, copper, aluminum, barium, thiamin, vitamin C, and it’s low in sodium and fat.  Teff is grain that can specifically benefit those who are gluten free, vegan, vegetarian, diabetic and anemic. Iron soaks into the blood stream quickly, and teff regulates blood sugar levels.  Dr. Oz has also reported that is known to relieve menstrual cramps.

Amaranth originated in Mexico and Central America and is most widely considered a weed. High protein in this carb is what makes it so valuable. Amaranth contains 9 grams of protein, and its protein concentration is one of the highest in comparison to other grains. Organic Facts wrote that amaranth contains antioxidants that reduce inflammation, such as arthritis, and it has been recently discovered to prevent cancerous mutations in cells. Calcium also plays a substantial role for amaranths nutrient benefits. Again, amaranth is one of the only carbs that contains so much calcium, with very few topping it off. This grain is beneficial to those unable or choosing not to eat gluten, as it is gluten-free. Amaranth also contains substantial amounts of fiber, vitamin K, vitamin C, vitamin A, potassium, folate, and lysine. Lysine is an amino acid that helps promote hair health and prevent baldness.

Triticale is a carb that has not been around for very long; it was discovered and created by a Scottish botanist in 1875. Like teff and amaranth, triticale is known for having high protein and fiber concentrations. Suffers of Celiac disease beware – triticale is higher in gluten than other grains. Its top health benefits besides protein and fiber are iron, potassium, and magnesium.

Most of the carbs provided can be bought at specialty food stores or shipped from online. Uncover the abs you never knew you had while enjoying carbs at their finest. Teff, amaranth, and triticale will individually satisfy a hunger for hours and when digested will help you lose weight. 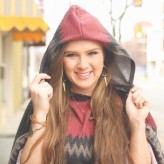 Senior at Ball State University pursuing a degree in journalism and fashion merchandise.